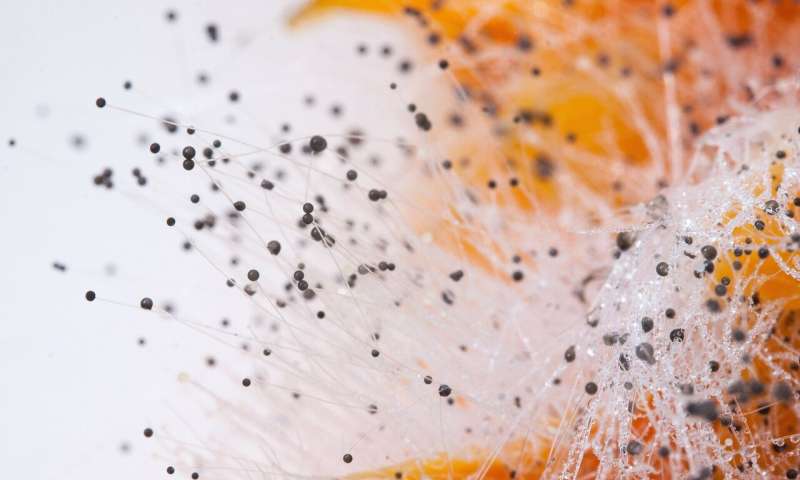 by City of Hope on black mold

City of Hope scientists have found a toxic fungus previously thought to not be infectious in the sinus tissues of a man with refractory acute lymphocytic leukemia. This is the first time that direct infection of a patient with the black mold Stachybotrys has been recorded. The team’s findings published this week in the journal Clinical Infectious Diseases.

Strains of Stachybotrys are typically associated with “sick building syndrome,” or black mold infestations in damp buildings that can make people sick by breathing in toxins that the organisms release into the air.

“We have now shown, for the first time, that this black mold can also directly infect immunocompromised people,” said Markus Kalkum, Ph.D., corresponding author of the study, professor in the Department of Molecular Imaging & Therapy at the Diabetes & Metabolism Research Institute at City of Hope and director of the Mass Spectrometry and Proteomics Core Facility.

In other words, the actual fungus was found in the patient’s tissues as opposed to just the toxins that are usually associated with illness from black mold. It was seen in biopsy specimens from the patient’s sinuses after he had complained of facial pain during a hospitalization associated with complications from refractory acute lymphocytic leukemia. Subsequent follow-up tests using modern molecular techniques, including DNA sequencing and species-specific staining methods, confirmed the fungus as Stachybotrys chlorohalonata.

“Even though an infection with a rare fungus, which wasn’t previously considered to be infectious, had occurred, City of Hope physicians were able to cure the infection,” Kalkum said. “It is notable that the infection with the black mold was resolved by treating with the available antifungal drugs, amphotericin B and micafungin.”

Unfortunately, the patient ultimately passed away. However, the likely cause of death was an infection with another species of rare fungi which are known to be difficult to treat. But the findings of the study show that certain cancer patients are at high risk for fungal infections and need to be closely monitored, especially since there has been an observed steady increase in the diversity of emerging invasive fungal pathogens in immunocompromised patients.

“Physicians and scientists, in general, need to drastically improve diagnostics capability to accomplish two things: quickly and correctly identify the microorganisms that cause an infection at the species level and rapidly determine drug sensitivities and resistances for each isolated pathogen,” Kalkum said. “Both tasks should be completed within a one to two-day turnaround time. Realization of these objectives is technically feasible, but requires substantial investment in research and the modernization of clinical practice. However, this approach has the potential to treat affected patients effectively with high precision in order to save many lives and prevent a lot of suffering.”

The Kalkum laboratory is also working to develop antifungal vaccines. They have previously demonstrated the effectiveness of an anti-aspergillosis vaccine in mice. Aspergillus infections typically happen in the respiratory system of humans and symptoms can be severe for patients with lung disease and/or a compromised immune system. The vaccine is currently being used to treat captive birds (penguins, Inca terns and eider ducks) in zoos. The birds are at high risk of developing fungal infections, similar to the risk seen in some cancer patients.

“Our research goal is to widen the spectrum of the antifungal vaccine, such that it can protect against many different species of fungi, even against Stachybotrys strains,” Kalkum added. “Furthermore, we need to find out how to best vaccinate and protect the patients who are most at risk for developing invasive fungal infections.”