An unexpected tornado can bring wind damage and hail damage. Hurricane & Storm force winds can cause severe property damage and flooding.
At FirstLine, we offer immediate help to secure your property and prevent further damage from occurring. Storm damage services can include the following:

In catastrophe situations following a community-wide disaster with widespread need, FirstLine’s ability to quickly rally manpower and equipment to respond to any-sized storm is unrivaled in the industry.
A storm is any disturbed state of an environment or in an astronomical body’s atmosphere especially affecting its surface, and strongly implying severe weather. It may be marked by significant disruptions to normal conditions such as strong wind, tornadoes, hail, thunder and lightning (a thunderstorm), heavy precipitation (rainstorm), strong winds (tropical cyclone, windstorm), or wind transporting some substance through the atmosphere as in a dust storm, smoke, sandstorm, etc.

Storms have the potential to harm lives and property via storm surge, heavy rain causing flooding or road impassibility, lightning, wildfires, and vertical wind shear. Systems with significant rainfall and duration help alleviate drought in places they move through.

Storms are created when a center of low pressure develops with the system of high pressure surrounding it. This combination of opposing forces can create winds and result in the formation of storm clouds such as cumulonimbus. Small localized areas of low pressure can form from hot air rising off hot ground, resulting in smaller disturbances such as dust devils and whirlwinds.

Types Of Storms That Can Cause Damage:

Hailstorm — a type of storm that precipitates round chunks of ice. Hailstorms usually occur during regular thunderstorms. While most of the hail that precipitates from the clouds is fairly small and virtually harmless, there are occasional occurrences of hail greater than 2 inches (5 cm) in diameter that can cause much damage and injuries.

Microburst – a very powerful windstorm produced during a thunderstorm that only lasts a few minutes.

Thunderstorm — A thunderstorm is a type of storm that generates both lightning and thunder. It is normally accompanied by heavy precipitation. Thunderstorms occur throughout the world, with the highest frequency in tropical rainforest regions where there are conditions of high humidity and temperature along with atmospheric instability. These storms occur when high levels of condensation form in a volume of unstable air that generates deep, rapid, upward motion in the atmosphere. The heat energy creates powerful rising air currents that swirl upwards to the tropopause. Cool descending air currents produce strong downdraughts below the storm. After the storm has spent its energy, the rising currents die away and downdraughts break up the cloud. Individual storm clouds can measure 2–10 km across.

Tornado — A tornado is a violent, destructive whirlwind storm occurring on land. Usually its appearance is that of a dark, funnel-shaped cloud. Often tornadoes are preceded by or associated with thunderstorms and a wall cloud. They are often called the most destructive of storms.

Tropical cyclone — A tropical cyclone is a storm system with a closed circulation around a center of low pressure, fueled by the heat released when moist air rises and condenses. The name underscores its origin in the tropics and their cyclonic nature. Tropical cyclones are distinguished from other cyclonic storms such as nor’easters and polar lows by the heat mechanism that fuels them, which makes them “warm core” storm systems. Tropical cyclones form in the oceans if the conditions in the area are favorable, and depending on their strength and location, there are various terms by which they are called, such as tropical depression, tropical storm, hurricane and typhoon.

Wind storm— A storm marked by high wind with little or no precipitation. Windstorm damage often opens the door for massive amounts of water and debris to cause further damage to a structure.

How to Prepare for a Hurricane & Storm

The first thing you need to do when preparing for a hurricane is make a plan outlining the information you will need and the procedures to be followed in case a hurricane hits. Your plan should include:

Discuss your plan with family and friends to ensure everyone knows what to do when a hurricane occurs.

You should gather supplies into a disaster kit to help you stay safe during a hurricane. Your disaster kit may have to last for several days, so ensure it’s well stocked. Key items are:

If you’re going to be at home when the hurricane hits, fill up all available containers with water beforehand, including sinks and bathtubs. Stock your refrigerator and freezer with water and ice. If the hurricane is severe (Category 3 or higher), water supplies are likely to be down or contaminated for multiple days after the storm.

NOTE: Water stored in sinks and bathtubs is safe for flushing toilets, washing dishes, and doing laundry. If you intend to use it for drinking, cooking, or brushing teeth, make sure you boil it for 3-5 minutes first.

To save room in your refrigerator, purchase non-perishables and canned foods.

Have one disaster kit prepared for your house and one to take with you should you need to evacuate. If hurricane watches and warnings are frequent in your area, consider storing a kit in your car at all times, so you are able to evacuate the area quickly. Remember to fill up the gas tank of your car if a storm is likely. 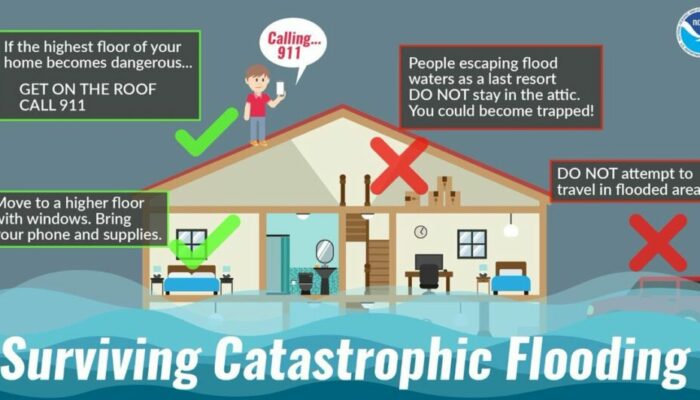 Establish a Safe Room in Your House Step 3

Even if your first choice would be to evacuate the area during a hurricane, bear in mind that this may not always be possible. It is best to identify the room in your house that would offer the most protection if you have to stay.

The ideal safe room should have no windows or external doors and be on a low floor of the building. Store your in-house disaster kit and hurricane plan in this room so it is accessible at all times. If a hurricane approaches, move water and food into this room as well.

Unlike with tornados, hurricane safe rooms should not be located in a basement. Hurricanes are frequently accompanied by flooding, so subterranean shelters should be avoided. If possible, have an option in your plan to move to higher floors in case flooding occurs.